We’ve been slacking on passing along Chris Baer’s trip reports as of late, so here’s a great piece from the Raven Fork about how knowing your crew can make the difference between having a great day and having a horribly epic day.

What goes through your head when you lend out two throw bags before putting on a river that maxes out at an impressive 730 Feet Per MIle?

It started to rain in the highlands of North Carolin and my heart started to beat hard. I had been in NC for a few weeks and had only made laps on the Green River Narrows, I wanted a change. Txt message, Face book, and all I heard back was that there wasn’t enough water and that nothing was going to run. That evening as I slipped into the back of my truck the rain pounded down. Through the truck topper it sounded like I was going to wake up floating, all I could do was dream about paddling. Unfortunately the rain stopped in the middle of the night. I awoke to dry pavement around me. The dreams of unknown white water were fading until I heard the phone start to ring. Brad McMillan had driven to the visual gauge on the Raven Fork and reported that it was a GO! Brad and I have paddled and worked together over the last few years, and have built a solid friendship. Usually we find ourselves drinking a little heavily, and laughing hole hardily, while intermixing a ton of class 5 paddling. 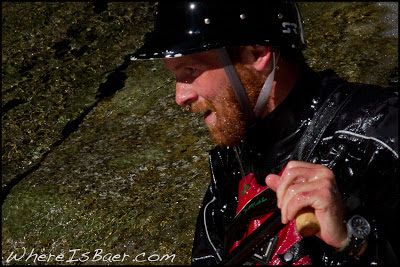 Brad McMillian classically smiling in the middle of chaos

Just out side of Cherokee NC I meet Brad at one of our favorite meeting places, Waffle House. I walked in to see the usual suspects. Not only was Brad sitting at the table, but so was his live in girlfriend Kim Miller, and mutual paddling companion Jake Kowalewski. Spotting Jake at the table made me a bit nervous. My memories of paddling with Jake were of  him being solid, but Raven Fork is not a place for solid boaters, you have to be damn good. The posy loaded into vehicles and made our way to the take out, that is distinctly on private property. Access to the take out involves a piece offering of beer to the local inhabitant for the use of his land for the day. The property owner struck up a deal with the paddling community a while back and now the information is passed down through the ranks. 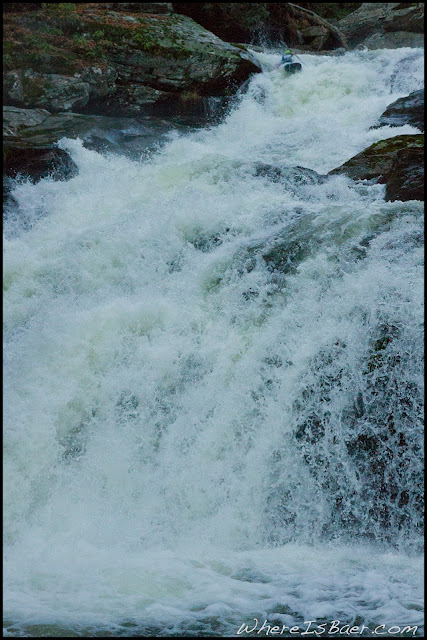 Our posy was shifting boats for the 4×4 drive to the put in when two other boaters turned the corner. Jake, Brad and I all looked at each other “do you know these guys?” None of us wanted to start an epic with a crew of strangers. Turns out I knew both of the boaters Scotty Mann and Will Dowling. After a quick hand shake and a “lets go!” I got asked not once, but by two different people in our crew, if I had an extra throw bag that I could lend. My nervousness was escalated. Then the classic question “who all has paddled this before?” Turns out that our crew had a whopping four laps spread out throughout the entire crew. My nerves were on fire. Was I really going to paddle one of the hardest runs in the south east with a crew acting this loose? We piled into my truck. The drive to the put in is distinctly four wheel drive. As soon as you leave the paved road you instantly start gaining a ton of gradient on loose dirt, lock your hubs early. The dirt trail meanders up quickly and then dead ends into a creek, park the truck and put the boats on your shoulder for a 20 minute hike to the put in. The last pitch leaving the hunting-fishing trail and heading down to the river is extremely steep and slippery. 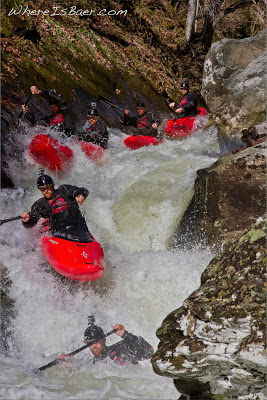 The pace on the raven fork is something I have never seen repeated anywhere. 730 feet in three quarters of a mile, and it’s drop pool. The first rapid looks scary, there is a ton of potential to crash, and crashing looks very dangerous. At the bottom of the rapid there is a must make eddy and all of the water takes off into the next scary rapid. This is characteristic of the entire run, one impressive dangerous rapid into the next. 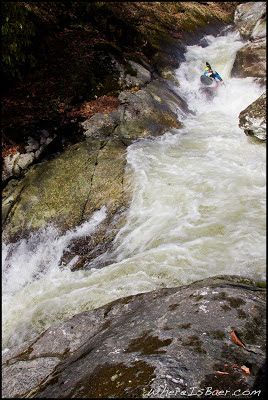 Scotty Mann with a huge boof on Razorback

The crew was doing pretty well on the water paddling almost everything until we ran into a funky placed tree in Jedi Training. A quick ferry to the river left side of the river left us in a nasty location, and a hairy ferry was the best way to continue our slow but steady down stream pace. 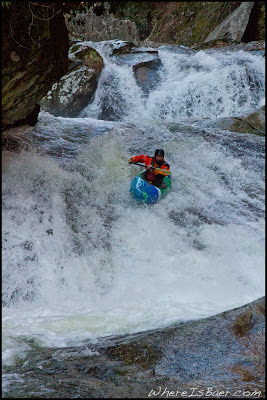 Will Dowling sliding down the last pitch of Mortal Combat

The talked about rapid on the run is Big Boy, and like every other rapid on the run it’s scary. A 20 plus foot waterfall with a tricky lead. The best part is that there is a rock distinctly in the landing zone. After spending a couple minutes looking at it, it was our crew that truly kept me from wanting to run it. No one had enough beta on extraction. If I did manage to miss my line and hit a rock from 20+ feet up I was going to be sitting in that river basin overnight before I was going to get evacuated. That was a horrible picture in my head, and helped motivate me to walk the amazing rapid. The rest of the crew followed suit. From Big Boy down the crew moved well again. Cave Man is the last big rapid and deserves to have safety set. The trick is that there is no good way to set safety for the first paddler. Someone needs to charge down and get out on a tinny rock shelf to make sure that the rest of the boaters don’t go under the disgusting looking undercut rock. 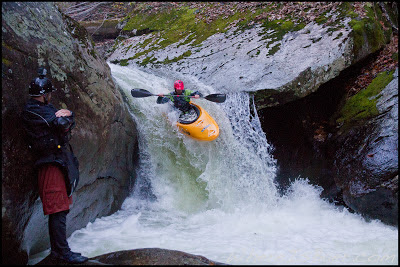 Jake Kowalewski a few inches off line at Cave Man

Taking it for the team, I offered to go first and set safety. Slight relief set in as Brad said he would come down 5 seconds after me. The theory was that one of us would stick our line and could assist the other before it was to late. We charged into the rapid and both had spectacularly clean lines on the bottom dangerous drop.

Why we paddle as a team

It was Jake’s turn, he landed just a couple inches off line and immediately caught the tractor beam of water that leads back under the rock. Brad reached down and gave him a quick yet firm hand and pushed him down stream and away from danger. Scotty was up next, and duplicated Jake’s line almost exactly. Once again Brad reached down and with one shove changed Scotty’s fate. 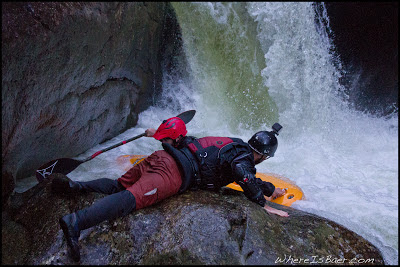 It is these moments when I have a tendency to pause, think, and wonder. I am supper appreciative that I get to push my limits, and that I have a crew of amazing paddlers that I get to paddle with, and that those paddlers can make those extremely dangerous situations slightly safer. Your team is only as strong as the weakest link? Sometimes the strong ones can help limp a weaker member through. Sometimes the people that are amazing on water, have no rescue knowledge, are slow hikers, have pre existing injuries, or conditions…… Know your crew! Know their assists, and their down falls, and play into both of them. They will be very grateful and you might just be the one getting that little push away from certain danger.

Some times your crew will astound you

Brad, great job on being there for the helpful hands, I’m sure Jake and Scotty appreciated it. But bring your throw bag the next time you paddle class 5. Jake, Way to step up, you have become a powerful paddler, and were totally ready for Raven Fork. You don’t always have to follow the leader, I would have loved to set safety for you at Big Boy. Scotty and Will, what were you thinking showing up to the take out with out the proper piece offering. Bring the man his beer.

another adventure with Chris Baer