Road tripping in Patagonia Chile, kayaking the Rio Llancahue and Fuy from Chris Baer on Vimeo. 4CRS Team Paddler Chris Baer has been busy for the past several weeks, chasing water all over South America, this time in Patagonia. Baer & Co. managed to find the goods on the classic Rio Fuy as well as the Rio Llancahue, despite angry locals and a temperamental van. 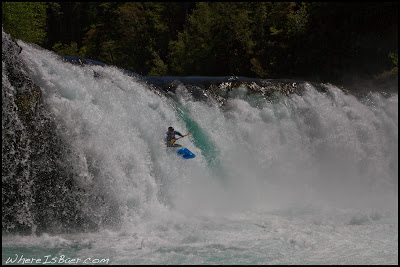 Casey Tango on the first water fall of the Rio Fuy Rio Llancahue Pucon was starting to dry out and the team packed the rental truck up to get on the road heading south. It was rather late in the evening when we arrived in the Rio Llancahue valley. After a quick search for camping we decided upon a grassy non-fenced portion of land near the river. The evening stars were magnificent and we were all happy to be out of Pucon. 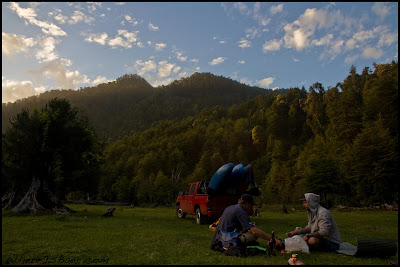 Casey Tango and Gordon Klco getting dinner ready in a beautiful pasture The sound of a tractor revving it’s engine awoke me. Then I heard curse words, even though they were being yelled in Spanish, the tone was clear and we were definitely camping in the wrong spot. The tractor ran over the corner of Tango’s tent, and its driver started beating our rental truck with a switch of bamboo. We packed up quickly but then noticed our truck had a flat tire. We proceeded to change the tire with the farmer glaring and cursing. Then we drove a couple kilometers up the road to get away from the angry local. The rude awakening shook the group a little. It took an hour of drying tents and sipping on tea to get the anxiety back under control. I had a vague recollection of the put in location, but it still took a few minutes and a couple bee stings to find. The Llancahue’s river bed reminds me of Colorado. The rock has a rough texture and there is an overall feeling of mank to the run. That aside, it still has some really fun rapids including a twenty foot water fall and a rowdy mini canyon.

Gordon Klco taking a big stroke into the unknown, Rio Llancahue The run went real smooth, but we were all still a little agitated from our rude awakening. The group consensus was to continue to move south. We packed the truck back up and headed towards the Rio Fuy, after repairing the flat tire in the town of Coñaripe. The Road 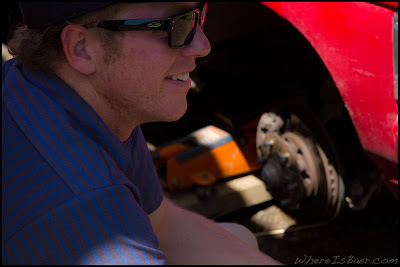 Gordon Klco sitting in front of our rental truck with the tire off getting patched again Living on the road isn’t easy in Chile, it likes to poke at your wounds on occasion. As we parked the truck at the put in for the Rio Fuy Casey Tango noticed the distinct sound of air leaking out from yet another tire. We drove around the quaint town of Puerto Fuy looking for a vulcanization shop. Spotting a car jack in a lawn we pulled over to a small house. The young resident hopped in our truck as he gave us directions to the local mechanic. An hour, and six US dollars, later we had another patched tire. It seems as if Chile isn’t really out to harm us, but it rather continually humbles us. Rio Fuy 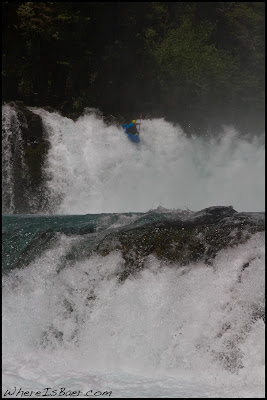 Gordon Klco popping off the first of the falls on the Rio Fuy The Rio Fuy is the only place that I have ever put on a true lake, even though I have put in at plenty of dams in my life. Lago Pirehueico is the headwaters of this amazing river. We literally put in at the marina. There is a huge ferry nearby and a few other large commercial boats. I really enjoyed the feeling of paddling out of the lake and into the river as it constricts the flow of water and quickly picks up gradient.

The peaks near Rio Fuy The largest volume run that we have done so far in Chile is definitely the Rio Fuy, which is about seven thousand cfs. It was really fun for me to get back on big water. The lead-in whitewater is classic big volume, with pushy rapids and a handful of hidden holes looking to give you a thrashing. The upper whitewater is super fun, but what I was looking forward to was the waterfall section. Two years ago I wasn’t able to paddle this section because the flow was several times larger. 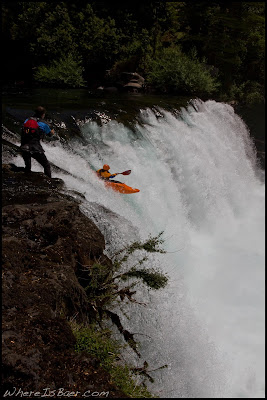 One of the Frenchies on the first falls of the Rio Fuy The waterfall section isn’t just waterfalls, it is a layer of bed rock that turns the meandering river into a beast for a half mile. The first and easiest rapid is a clean twenty-plus foot drop. Second is a slope to six foot drop that lands in a boiling eddy. Third is a drop that reminds me of the Zambezi. It has a protected tongue that leads into a boiling eddy-line, wave-hole combo. Fourth, and a little too close for comfort, is the Bird Sucking Hole. The hole has the reputation of being so powerful it actually sucks birds out of the sky and into its depths. I don’t know about all of that, but it did look like a body re-circulator. If the previous three drops haven’t made you lose your nerve yet, a very thin left line is available over the hole. The finale is a protected twelve foot ledge with a tricky, blind lead in. If all that goes well, the normal take out is just down stream on your right. 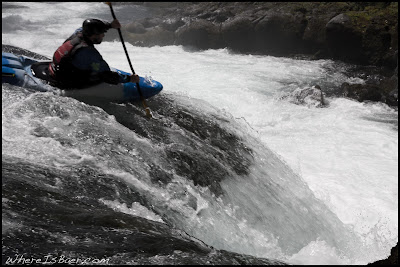 Casey Tango sloping off the second drop in the water fall section of the Rio Fuy Eager for more action? Continue down stream. The river mellows out for a few kilometers and then the gradient picks right back up as it nears Salto Huilo Huilo, a hundred and forty foot monster waterfall. There are a few continuous rapids, and then the river breaks up through a hand full of islands where it becomes obvious that its time to start scouting. Here there is an elaborate rapid with multiple channels. I believe all the water in the left channel disappears into an underground fissure. The middle channel cascades dangerously close to the left line, and goes through an amazing double-tiered rapid. What water is leftover continues to the right through some tight slots and off a marginal twenty-plus footer. Remember to scout ahead, Salto Huilo Huilo is coming up quickly, and there are only a couple safe exit points before the falls. 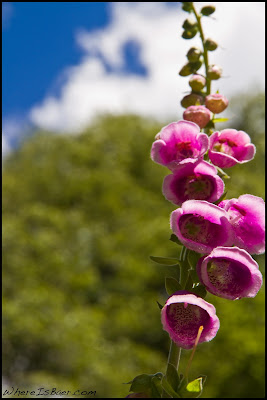 Taking some time to enjoy the little things 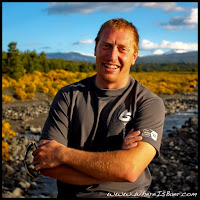 Write up and photos by Chris Baer