Pucon season was wrapping up, and my itch to explore was growing by the day. I talked to Matias Nuñez about taking the bus over to Bariloche, Argentina and paddling with him before heading down to the Rio Futaleufu. Matias’s beta sounded bleak. Everything was on the low side of good, but he thought that we could go into the Rio Manso and have ok water levels. The Manso has had rough access issues over the years. My previous trip to the river involved getting harassed at the take out by the park ranger who believed it was illegal to kayak through the canyon. The ranger was even bold enough to call Matias a bad Influence for bringing me into the canyon. Turns out Matias is a great influence, he spoke to the proper people and got the access issue clarified. Now days the local officials actually contact Matias to go into the canyon and do biological research. Arriving at the Bariloche bus station I was greeted with cold weather and ornery cab drivers. After some dispute over whether or not my kayak fit on the roof of the cab, I caught a ride to one of my favorite hostels, Refugio Patagonia. While spending long periods of time traveling there is something very comforting about arriving in a location that you are familiar with. Two years ago I had spent a week at this hostel while paddling with Matias. This year the owner of Refugio Patagonia, Tato, stepped out of the hostel and greeted me with a huge grin and said, “Wow, you’re back. Come on in, I’ll make you some fresh coffee”. The road into the Rio Manso is only one lane wide, and to prove it, the local officials have mandated that the road is a one way street. In the morning you can drive into the park, and in the afternoon the road direction reverses and you can leave. Matias and I chatted about our plan to paddle the river. We would meet early the next day to coincide with the one way road that allows access to the put-in. 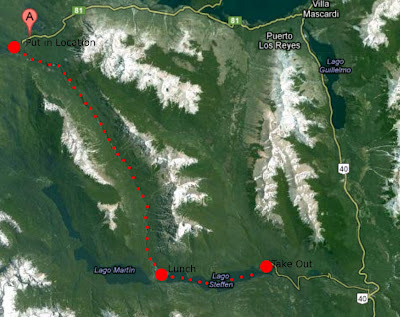 A small idea of where we were, REMOTE, huge mountains on both sides.

The next morning a pickup truck pulled up in front of the hostel with five people already smashed into it. Matias and Santiago where there to paddle, the rest of the truck was filled with our necessary shuttle driver, and a couple of girlfriends. A few moments later I had my gear strapped to the truck and the six of us were headed on a two hour drive into the middle of Parque Nacional Nahuel Huapi. Upon arriving at the Manso we checked the level and were happily surprised that the water was at a low medium. This meant that all of the drops were going to be good, and there was only one probable portage. While gearing up our energy level was super high. Just downstream was the 50 foot waterfall named Salto los Alerces (Tamarack). As we climbed in our kayaks all I could think of was the line I wanted to put together on Alerces, and the fact that my shoulder might not be up for it. Three weeks had passed since I injured my shoulder, and paddling 15 kilometers of class 5 was probably not the best way to test it. After a quick scout Matias hopped in his boat. A couple strokes later and he launched off the left shoulder of the waterfall. He got his nose down and connected with the rest of the water coming in from the right, disappearing into the veil. A long moment passed and Matias reappeared 50 feet below, celebrating in the backwash with his fist pumping in the air. After stretching out my shoulders and practicing my tuck, I ran through the possible outcomes of what I was about to do. It seemed so routine. I was about to risk my life and it scared me. I smiled and whispered to myself,  “This is going to be so fun.” Moments later I was lining up a rock flake and took a huge stoke.  Flying past all of the water out into the air I leaned forward and started falling. I was way out in front of the falls flying through the air for what seemed like an eternity. Then BAM the reconnect hit me like a ton of bricks and I started to rotate. Now I was crashing, not flying, and I was rotating towards head down. All I could do was tuck tighter and wait for the impending impact. It took forever… The next thing I remember was wondering why my legs where wet, and why does my left leg really hurt? I had rotated in the air, slamming into the base of the falls on my head. My boat hit the surface tension of the water and stopped, violently ejecting me. While getting swirled in the hole at the base of the falls I started kicking my feet. It wasn’t until I reached the surface and took a breath that I really accepted the fact that I was swimming. The 100 foot overhanging wall in front of me was coming up rather quickly, so I tossed my paddle and started swimming hard. After a little downtime I found a rock shelf just under the surface of the water. Slowly I climbed out of the water and did a system diagnostic. My head and neck felt fine, both of my shoulders felt ok, the inside of my left calf was bright red (I had smashed it on my Pelican Case as I was ejected), and my left shoe had been ripped off. It took a couple minutes to gather my gear, collect my wits, and put my shoe back on. The in-between rapids are a blast and take you through a super remote valley. Most of the time on the river all you can see is dense jungle on both sides and a never-ending beautiful blue green river dropping away in front of you. Our Team paddled the in-between rapids with huge smiles, taking in the gorgeous scenery. 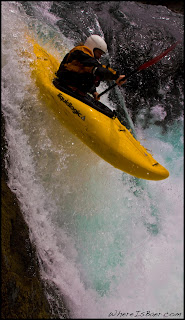 Matias catching an off camber boof.

There are a couple of other major rapids on the run, Pinball, Triple Falls, and Horse Cock. Pinball has a relatively long lead-in that usually disorients you, and then there are two large offset holes to punch through. Santiago managed to make this rapid look rather intense as he almost surfed the first hole and got spun around after taking a big chunk of the second hole. After watching Santiago Matias and I tweaked our lines slightly and had a much smoother result. Triple Falls is just three fun ledges in a row, the last being a 15 foot big water boof. The other one is named Horse Cock. This thing is a huge 60ish feet with a nasty lead-in, and a cave at the bottom. After some solid scouting the decision was made that we didn’t have enough people to set proper safety, and that none of us had big enough balls to match the size of the Horse Cock. Five hours of paddling, scouting, and swimming allowed us to cover 15 kilometers on the river. The Manso deposited us into Lago Steffen. Matias, Santiago, and I took our time to eat a late lunch and prepare ourselves for 5 more kilometers of paddling across Lago Steffen to our truck. An hour and a half of paddling across the lake and we arrived at the truck. We were greeted by our shuttle bunnies, they had big smiles and hot Yerba Maté waiting for us. 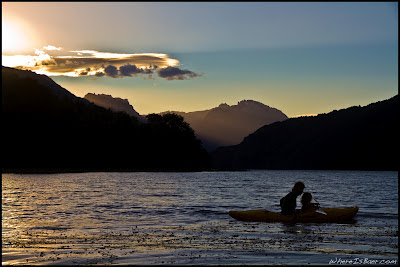 Looking back across Lago Steffen.

Paddling the Manso definitely was a rushed test for my shoulder. The tightly packed pick up truck felt slightly less uncomfortable on the drive out of the park, knowing that my shoulder had healed up enough to handle paddling class 5. I was back! 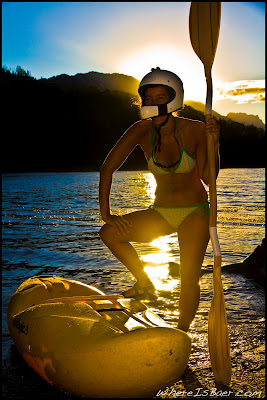 Write up and photos by Chris Baer.