Stomping that nose down

The epitome of nervous anticipation, kayak an illegal canyon, with a very committing gorge, at high flows. The weather in Futaleufu had turned rainy and the rivers were rising, after a great high water paddle of Inferno canyon I received a call from Matias Nunez. He said that the flows on the “Blanco” were starting to come up. I needed to catch a bus out of Futaleufu immediately. Walking out of the town of Futaleufu I bumped into Clay Wright and friends, and caught a ride across the Chilean Argentine border to the town of Esquel. The next day I caught a bus to a speck on the map and waited on the side of the road hoping that Matias would show up. 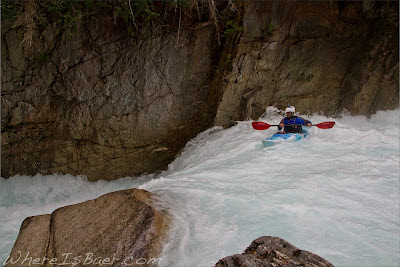 An hour later Matias’s pickup truck came into view and I was greeted with Yerba Mate and a warning that the river was a little higher then Matias had previously though, he said,”I might walk a couple things, but you have to run it all.” I was already nervous from previous rumors of, walled in canyons, big drops, and the fact that if you are not from Argentina it was technically illegal to paddle. The entire river is on private property and the American owner doesn’t want any one on his property. Luckily for the locals, there is a lake on the property and Argentine law says you must provide access to water ways, for Argentinians. 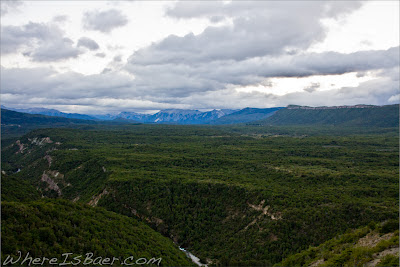 The laws are simple, If you are Argentine you can access the water ways, if you are from anywhere else it’s a no go. I was not supposed to be on the property, but that hasn’t slowed me down much in the past. I like to think that almost all kayakers break laws on a regular basis. We are constantly blurring trespassing laws and changing in and out of wet gear in public. 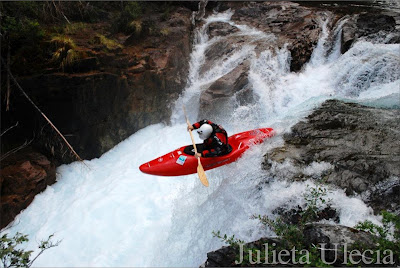 Chris Baer, poping off another 10 footer

The level was ten inches on the bridge gauge, and it looked bank full to me. The high flow made a couple of the bigger rapids super fun and also turned a couple rapids into a jungle portages. Over the next week I was blessed with the opportunity to sneak pass the gate keeper two more times and paddle with Matias Nunez, Facha Morron, and Manuel Carignan. We paddled at a variety of flows from 10 to 2 inches. The locals talk about these flows as “damn that is high”, all the way down to, “most people still call this high”. 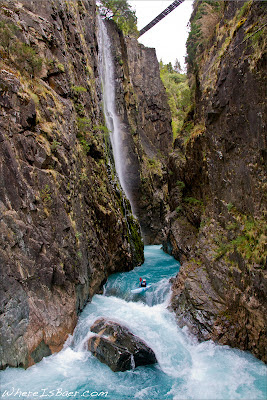 Manuel Carignan, tucked deep down in the “Blanco” canyon.

The river is simply amazing, bright blue glacial water, tucked between polished granite, in a 200 ft deep canyon. The river features are as beautiful as the scenery. From the top you get a tricky double drop, boof to slides to vert, boof to stumpy walled in hole, 10 footer to off angle 20+ footer, slide into a nasty wall, 8 footer that kicks like a mule into a mandatory 40 footer, 10 foot almost vertical slide into a super committing canyon, 200+ foot tall walled in boogie, and a nasty multi tiered rapid to get you out of the canyon, and into the two mile class 4+ paddle out.

The “Blanco” is the epitome of class 5 creek boating.

another adventure by Chris Baer.