Rio Division
Ferdinand showed me a you Tube video of a couple of people trying to do the first descent of the Division river. These people were in a raft and a ducky, it looked laughable at best. It turns out the joke was on us. 2 days, 5 hours of hiking and scouting, and we accomplished just a bit better results then the rafters.

I was sitting in the town square of San Isidro, when Ferdinand and Todd pulled up. We went and had breakfast, the conversation was filled with what do you think we are really getting our self’s into. We planed for a two day trip, deep canyons, rope work, and just about every untold possibility.

A few minutes later Felipe showed up he was to be our shuttle driver and local beta guru. We hoped into his Toyota Land cruiser and we were off to Santa Eduviges.

Upon arrival we did a little pre put in scouting, we decided to skip some class 4 warm up and head right into the meat of the run. We took our time packing our over night and rescue equipment. The time was 12 noon, we had 5 hours of day light before we needed to camp, and everyone was pretty excited about the run.

We put on and went a mere 400 meters before we reached the first, previously unrun drop. It was a 20 footer that landed in a odd shaped cauldron. The walls were definitely undercut and the water boiled up 30 feet away from the drop. One by one we took our chances, and amazingly enough every one had relatively good lines.

We went another 100 feet, and saw the lip of a drop that looked absolutely amazing. Unfortunately it fell 30 feet onto a rock shelf, not to mention it was the start of a very containing canyon.

We took our time scouting the upcoming canyon and it was one horrendous looking drop after the next. There is no doubt in my mind that without some amazing rope work this canyon will never be ran. We had managed to move 500 meters in 5 hours, something had to change. The beta we had said there was another canyon ahead and it looked as containing if not more from the topographical map. It was time to skip the next canyon or anticipate spending a second night, with few calories somewhere deep in the canyon. After appraising our options, it seemed best to hike 500 vertical feet back up to the road and a half a mile to the town of Santo Thomas. Upon reaching Santo Thomas it was getting cold and dark. We meet a few locals and Ferdinand immediately started negotiating a truck ride down stream around the second canyon. An hour or so later we piled our equipment into a pick up truck and started the drive. As the rain pounded down we arrived at a shed, I was so happy to have a mildly dry place to lay my bivy sack.

We awoke to beautiful views 1500 feet above the river. One of the locals told us he could hike into the canyon in 20 minutes, we anticipated just over an hour with the kayaks. What we encountered was a 2-3 hour hike through coffee fields, then banana fields, then the ground gave way. It got too steep to plant anything and the vegetation returned to native Costa Rican Jungle. We lowered our boats with ropes for the last 500 feet to the river. Upon reaching the river I was delighted with the sights of clean steep whitewater.
We had about 9 kilometers of river to paddle to get to our planed destination, the town of Savegre. We reentered the canyon about a kilometer or so above where the other group had. Therefore we had a kilometer of amazing, steep, first descents in front of us.
The group had a new energy back on the water, we paddled well. Drop after drop we scouted and ran great lines, the white water was steep and technical. 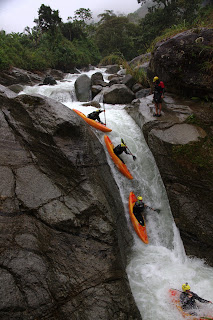 There were no portages and most rapids had multiple fun lines. We paddled for less time then we hiked the day before, and we had the Savegre bridge in sight.

Ferdinand made a phone call to Felipe, he was over an hour away so we decided to push on to the town of El Brujo. We were greeted with news that the next 9 miles to Brujo were class 4 and had been ran not that long ago. This took the group moral to new heights, and before you knew it we were boofing off random rocks, and running obscure tight lines. Just over an hour later we saw Felipe on the side of the river, it had been a long but very rewarding day.

There is absolutely no way this will ever be a classic, but with a little work you could make this an amazing one day adventure.

With a nights rest and a good meal in El Brujo we tackled another big mission.

So Felipe’s father lives on a piece of land near the Los Quetzales National Park, and was speaking highly of a back yard run. Ferdinand was more then excited to pick off another first descent, and so was I. Todd, Ferdinand, and I loaded boats onto horses in the morning, and hiked back into the jungle. The horse trail was beat down, deep mud, and deeper ruts the entire 11 kilometers up to Felipe’s house. Once at the house, Felipe’s mother brought us a great hearty lunch. It was already just past noon and we had 11 kilometers, 5 or so of which had never been paddled before to descend. My energy was circling the drain, but I was excited to see some more quality white water. 10 minutes into the run I crested a pour over to see a retentive hole. I cranked out a hand full of strokes aiming for the right side of the hole. I hit the hole got stern stalled and felt the water pulling me back in for a ride. I took a couple good rides, and got on the foam pile, a few strong strokes and I was heading back in for another ride. A few more seconds later, and my low energy had gotten the better of me. I slid my knee out of the thigh brace and popped out of my boat.

It took a couple minutes to recover my gear, and I tried to get my head back in the game. Around the bend was Felipe and the whole family, they were there to watch us run the “big one”. It was an ugly left to right drop that had a odd looking hole at it’s base. Ferdinand fired it up first and got blown hard left into a pin rock. He dug in with a strong brace, and pulled himself around the pin rock and into the pool. Todd caught a lower eddy and made a strong move left to right but got spun out near the lip, and fell into the drop with almost no speed. This resulted in another entertaining run. I peeled out of the top eddy supper low and kept my momentum down the drop, I managed to cut through the nasty first hole, just to get immediately flipped in the compression hole behind it. Our exhaustion was starting to show in our boating.

We headed down stream picking off other drops and keeping a relatively fast pace. As we got further down stream Ferdinand informed us that we had already paddled more then half the gradient in the first third of the run. This put us all in a state of calm, we started goofing around again. A few more kilometers went by and the recognition of what we had done started to come over me.

In three days we paddled 23 miles, hiked 10 miles, kayaked 5 miles of first descents, and had an amazing time exploring a beautiful corner of Costa Rica.

The video Ferdinand showed me, and our only real beta.