Home on the kayak tour

Kayak homesteads take on a myriad of different shapes, mine is a 1984 Ford F150, The Boone North Carolina homestead was a classic rambler only inches above a creek that regularly flooded. We awoke on coaches with plenty of empty PBR cans strewn about. Our concentration quickly swung to a strong batch of coffee, and the rain that pummeled the surrounding county the night before. Every one hoped on there internet tools and started blurting out levels of different local runs.

Ty Caldwell, Mark Taylor, Clay Lucas and I set our sites on the Laurel Fork. The flow looked spot on, and the rumor was, there was a “marginal monster.” A 60 foot cascading water fall in the middle of the run. The car got loaded down with kayaks and a quick stop at the local fast food joint got us in the mood for some class 5 creek boating.
Once we reached the put in, we instantly realized we were in the right place. There was a myriad of other kayakers roaming around. Most of the other boaters were complaining about the high water… High water sounded like a ton of fun to our crew, and we quickly suited up and put on.
The run starts off with a bunch of fun class 4 moves that are interspersed with a ton of overhanging bushes and downed trees. There was wood every where, I got to the point that I wasn’t worried about the rapids but was concerned about where the next ill placed tree would be. 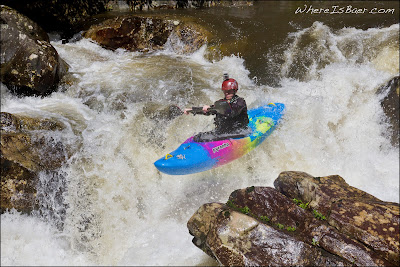 A few miles into the run we came to the only “hard” rapid of the “normal” run. Darwin’s Hole, there was kayakers everywhere. The kayakers were trying to scout, and wondering how they might be able to portage around what our group thought was a “damn good rapid.” One by one our team made the “hard” rapid look like another class 4. It started with a fun off angel boof into some swirly water, then another 5ft boof that landed in a protected hole. 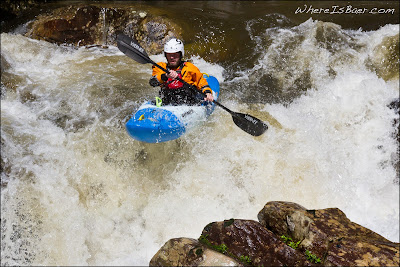 Heading down stream I started to get lost in the drops, all of the lead-ins looked very similar. Then we came around a corner and saw what we were looking for, a gigantic horizon line. The lip was a hundred feet wide and the old growth trees growing below looked very small.
A long scout ensued, it was definitely a “marginal monster.” Mark Taylor set his eye on the center line, a bouncing, reconnecting, slope to vert to slope. After watching his very clean but bouncy line, my concerns were reconfirmed. I really didn’t think I would have much control on the third reconnect. The speed and violence of the reconnect looked like it could be a career ender. So… I contemplated a far right line. It was a triple drop jumble, the first two drops looked like the tea cups on the Paralyze rapid of my local run Lake Creek. The third feature was a 40ft drop with a light reconnect half way down. 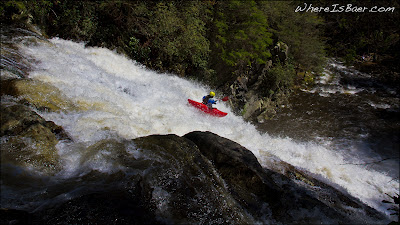 Standing above the drop visualizing my line I looked down at my new friends, Ty gave me a hand jesture that made my 80% certainty turn to 100%. I was going to paddle this marginal monster, and I was going to make it look good.
Sliding into the water I looked down at the the beyond tricky lead-in, my hart was beating heavy. Two inches off my line at the lip, meant I fell eight feet onto a rock shelf. Quickly resetting my angle I fired off the second drop and was again a couple inches off line and fell another ten feet onto yet another rock shelf. My ankles were sore and the front of my boat was disfigured. Worst of all I was stuck in a micro eddy inches from the 40 footer and way off angle. The next three minutes were filled with cursing and trying to figure out how to regain the angle I needed to paddle the finale big drop. Contemplating my fate, the decisions was made to turn around in the tiny back yard swimming pool of an eddy. Fate was being tested, there was a decent chance I would fall off the 40 foot drop backwards. The stern of the boat was extended nearly a foot over the falls, as I turned around a smile finally came back to my face. My ankles no longer hurt, and I was super excited looking at the final horizon line. A couple set up strokes and a huge weight shift, I was air borne one more time. Seconds later I was at the bottom of a truly Marginal Monster with a gigantic smile.

Upon finishing the Laurel Fork our group received an invitation to check out the Doe Gorge. Our beta was that it was an absolutely beautiful gorge filled with some fun class 4. Our group was pretty fired up after the Laurel fork, and put in antics quickly followed. We gave Mark Taylor a huge shove off the put in bridge, he sailed through the air landing supper flat off the 12 foot put in bridge.
The Doe Gorge lived up to expectations, the scenery was top notch. We traveled through an old gorge filled with gigantic trees and classic south eastern beauty. The white water was fun class 4, and the only down fall was the fact that the local red necks still think the river is there trash can. We dodged propane tanks, tires, and the occasional basketball while paddling a river that truly needs a good clean up day.
Boone NC has inspired me to revisit northern NC again and again, thanks Boone Boys.

Boone NC, hosts the most fun loving community of boaters ever. These guys went out of there way to welcome me into there community and show me a spectacular time. We charged into rapids 12 at a time, with people in every imaginable and unimaginable eddy. Took the time to stop and enjoy beers in the amazing canyon. Showed off every blind corner, tiny slot move, and silly attainment ferry. Freewheeled off of every drop conceivable, and boofed a hand full of terrifying ledges.

If you haven’t watched the Charlie Sheen video, where he claims to have Tiger Blood in his veins. click below. http://www.youtube.com/watch?v=h5aSa4tmVNM The annual Watauga race was approaching quickly and Team Tiger blood was formed, Ty Caldwell, Tyler Mayo, James Lowry, Matt Redmond, Clay Lucas, Mark Taylor, Ryan DeKay, and I had joined forces to be the almighty cause of chaos and destruction during the race.

Imagine lining up against the river bank with 50 of your closest friends. Make sure the slowest people are downstream and the fastest upstream, so they immediately have to start making there way through the pack. Now place a bridge that is only two feet above the river level a little too close for comfort.  Nascar fans use the term, “the Big One” for the amazing wreck that takes half of the cars out of the field. The Big One was about to happen on the Watauga. GO!!!! The pack took off and as the slower paddlers were getting to the bridge the faster paddlers had approached full speed, the “big one” occurred directly under the bridge. There was screams and paddles clacking off each other, the bridge, and faces. As the posse reemerged from beneath the bridge the order of the pack was significantly altered. A couple more minutes into the race and the collisions and “rubbing is racing” attitude was in full effect. Ten minutes into the race and the lactic acid was coursing through are veins, the pack had become a single file train through only some of the rapids. The Watauga river is one of the best down river race venues I have ever attended, there is a myriad of good lines through every rapid, and this allows for constant jockeying of position. Thirty minutes in and we were approaching the finish line, State Line Falls. The top competitors were still fighting it out while entering the final rapid. Team tiger blood won the race, by having more fun and creating more chaos then any one thought possible. Chris Gragtmans personal blamed me for his loss, lol. Eric Chance the local wonder, did have the fastest time… but who cares. The Watauga race is an amazing grass roots event that put a gigantic smile on my face.

Watch out Team Tiger Blood is out there.