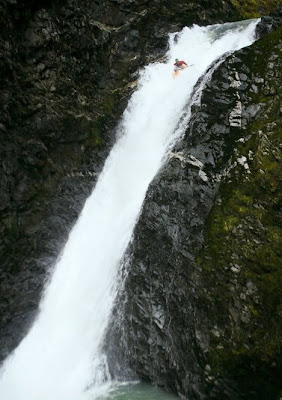 As the snow begins to fall in Colorado, up here in the Northwest, my boating season is only beginning. It started raining a few days ago and shouldn’t really let up all that much until April. That’s ok with me though. With a La Niña weather pattern approaching, I am more than ready for the waters to start trickling down into the Columbia Gorge where they will fill some of my favorite runs in the world.
Since I’ve been up here, though it was dry until now, I’ve been keeping up with paddling, going out every weekend or so. It’s been mostly low water green truss runs but I have managed to get out to some more distinguished creeks every once in a while. Here is some of the footage from two such occasions:

Ernies is a sweet run outside of Seattle with about as many good rapids on it as the Little White. The granite boulder gardens just never seem to end. We had relatively low flows so a lot of sieves were exposed which gave the run a sketchy feel. Never the less, it was a great day on the water and came with a surprise at the end. As we were floating to the takeout, a nice landowner called us down to the river and gave us smoothies and beer. That just doesn’t happen in Colorado. It was a sweet way to end the day. Anyways check out the video to see a few of the amazing rapids on this run.
Dipper Creek

Dipper creek is a relatively new, yet almost infamous, run up in BC. First descended by the TRL guys 3 years ago, this creek has quickly become known as one of the most difficult and committing runs in the world. Seeing pictures and video’s from last years descents, I was just waiting for the flows to drop to a low enough level to make the trip. After weeks of “just too high” flows, a few nights of cold weather finally brought it down to a reasonable level, so Ethan Smith and I made the drive up there.
Flows were slightly higher than we anticipated and we ran out of time to explore the lower gorges but we did get to run some massive waterfalls at the top. Above is the footage from double dip and the big dipper.
Enjoy.