Racing usually allows the participant to push their personal envelope on a relatively safe course. No matter how many ropes, spectators, cheering fans, and Frog Men there are The Green River Narrows is NOT a safe course. I love this race!  ….. Well, actually I don’t like racing, Why would I want to go as fast as I can through such an amazing canyon? It’s an entirely different rush, trying to challenge the stop watch and the river at the same time.

The Green River water flow is seriously augmented by a damn that is located just a few miles upstream of the race venue. During the week leading up to the race, competitors were greeted with an interesting and unstable two hour dam release. The release water ran at a moderate flow of eight inches. Race day, the generators were cranked up. Twelve inches was splashing on the gauge. Most of the competitors, weren’t ready for such a step up. Competitors from out of town, internationals, and the folks that thought they might be able to make it down at 8 inches with safety set up everywhere, were about to get handled.

The starter looked down at me, “Chris you got 10 seconds” Quickly I responded with a huge grin and a solid “WHOOOOOP! this is so scary” 5    breathe 4    chuckle 3    splash water in face 2    breathe 1    laugh out loud GO! as Brad McMillian puts it, “the scariest words I hear all year” 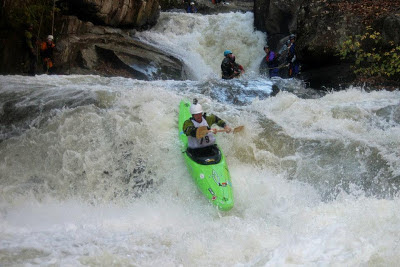 Sliding towards the finish line

30 seconds later I muck up my line. Instantly I realized that I wasn’t going to succeed in my goal of finishing in under five minutes. Then another small bobble, I had to sneak Go Left, someone had already created some spectacular carnage there. A racer had pinned their boat in the drop (a week later parts of the kayak where recovered). Next, I got loose coming through Zwicks, and pulled off an amazing side ways boof over a sticky ledge. Panting hard, I spot 100 of my best friends, along with 700 random yelling people, I was about to enter Gorilla (the big one). A quick gasp for air, a precise stroke, and I flew through the Notch. Skipping around the 90° left hand turn, and flying off the 18 foot fall, I hear all 800 of them cheering. The following slides, where a mess. Spinning through eddies I continued to pant. The last couple strokes sprinting towards the finish took every thing I had. All of the bobbles, spins, and a week of training at a vastly different water level lead to a personal best race time of 5:33. I could have done significantly better, but that’s racing. It’s not what you can do, it’s what you do, that second, when they say GO! 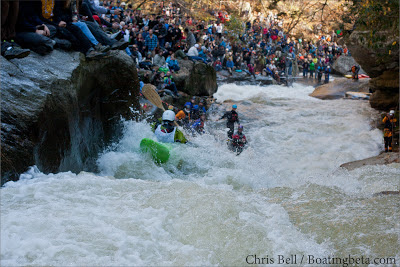 800 friends, and a lot of vertical to cover to the finish line

Wandering back up to “Gorilla” hooting and hollering for my friends, I received the information that more then a couple good boaters had crashed. “WHAT? Hale swam?”  I couldn’t believe what I was hearing. It wasn’t just me that had blown some lines, the entire field was crashing.

Bill Clipper came over to ask me to join him in the “Pit” (the base of Gorilla) Bill said, “we need to relieve some frogs down there” The pit is a cold place, covered in spray from the falls, and slick as snot. There, we the Frog Men, assist racers that tomahawk off of Gorilla. We had our hands full.