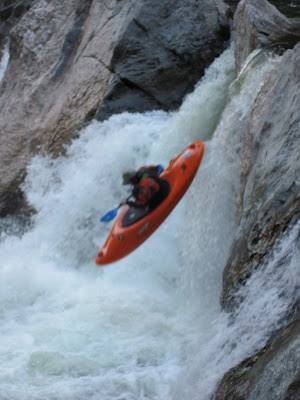 Cody plopping off the falls.

Written by Cruise Quenelle
As the winter dwindles away and the days get longer, it only means one thing. Kayak season is on its way. Early Spring in Durango is a great time of year to experience all four seasons in one day. After a day of spring powder stashes on Red Mountain III, I received a call about paddling the Black Canyon of the Gunnison the following day.
A quick call to Ben Luck ensued with talk of trip logistics. The game plan was humbling to say the least. A one day descent of the Black Canyon and Gunni Gorge. Not only was the flow double from previous personal descents but the seven mile road to the put-in was closed. With a quick recruit of four willing Durango paddlers (Ben Luck, Cody Beach, myself and Nate Klema) we were on our way to Montrose to meet Matt Wilson of Telluride.
As I slept that night in the shade of a full moon near the closed gate, I tried to imagine how our day might just go the next day. With Class V flowing fourteen miles through the deepest canyon in Colorado, lots can happen. Lines are small and the water is pushy. But the rewards of the Black are what keep drawing us back. 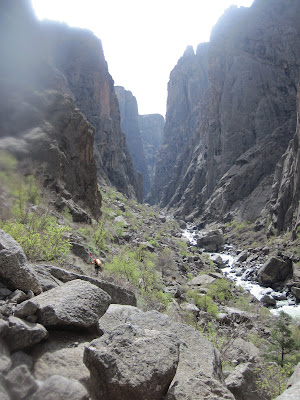 Ben in the middle of the Hell Portage. Its not so bad when you don’t have 25 lbs of overnight gear in your boat.

With a four A.M. wake-up call the day had started. We packed our boats and made sure everything was accounted for. Almost no words were spoken other than the whispered curses of the lack of morning coffee. Under the light of the full moon and our headlamps we departed on our full descent of the Black Canyon. As the road switch backs seven miles along the cliffs it drops almost fifteen hundred feet to the canyon floor. Taking shortcuts on almost every switchback kept us on our schedule of hiking in within two hours.
We made time to have breakfast next to the river and wait for the sun to come up. As we talked I made small observations of the swollen river. Coming in at around 1,260 cfs it was almost twice the flow of other times I had been there.
Crashing down through the first couple miles of our twenty eight mile journey, I enjoyed the added flow. A bit more pushy and filled in. Day Wrecker is the first rapid and for many the first portage. Some us tucked tail and started our short hike/portage on river right. Nate fired off Day Wrecker first with a clean line down the left of center line. Ben was in hot pursuit with two micro eddies catches on the way down. 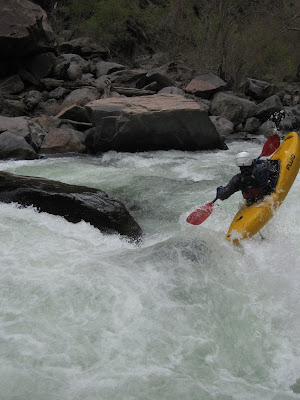 With the next few miles the pace was set high. It was going to be a long day even if everything went smoothly. Every step really counts down there. There are miles of complicated Class V rapids dotted with sieves and undercuts. Add in almost a dozen portages and you got yourself a recipe for bad time. Really makes you just think of how important it is to have a solid crew. The Black is a team effort!
The steep rapids are as pristine as the 2,200’ walls towering above. You cant help but feel small. Most rapids have that big water feel. But it’s got it all.
Lot’s of long read and run boogie water. Then as the rocks start getting bigger, you get that funny water feeling under your boat. As the boils bloom under you from every direction. A good example of this is Ball Crusher. Ball Crusher is often a portage but most all of us had good lines down the middle.
The pool drop sections are some of the most popular. Its no wonder because there’s a perfect 15’ pour over. After stomping your boof, turn around and take it in as your friends come blue angle formation over the horizon. 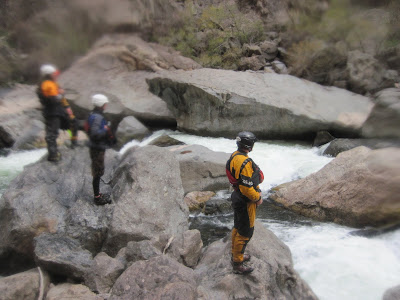 We all made sure to soak in the stoke. We knew what the next step in the puzzle was and no one was looking forward to it. It’s been deemed the Hell Portage. One mile of shouldering your boat up and over VW bug size boulders. If you do the Black canyon pack LIGHT. Believe me when I say ounces count. There is a trail if that’s what you want to call it. Stay high near the wall. The boulders are smaller and more manageable. Cody with his boat on the head and shouldering his boat backwards technique smoked all of us. He should beat us. He’s only twenty and he slams railroad spikes in for the Durango/Silverton Narrow Gage Railroad.
Arriving at Cave Camp we did our ceremonial wash off of poison ivy. Prepare for the ivy. The Hell Portage is literally blanketed with tree size poison ivy bushes. Cave Camp is quite nice though. We sat and ate our second lunch of the day before noon. We were ahead of schedule. This was my chance to do a little fishing. Fishing in the Black is nearly instant gratification. Without a doubt your going to reel something in. After about fifteen casts I hooked one. It felt heavy but I had no idea of its size, until I caught a glimpse of it breaching the surface. The next five minutes were some the happiest moments of my life as I reeled in a 20+ inch Rainbow Trout. I let the fat mother go and we continued on our portage. 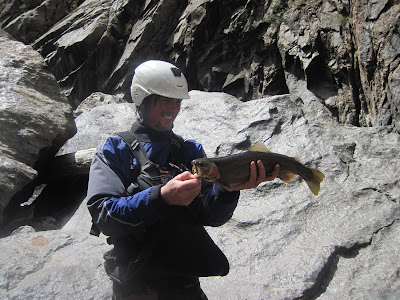 Happiness in the palm of my hand! 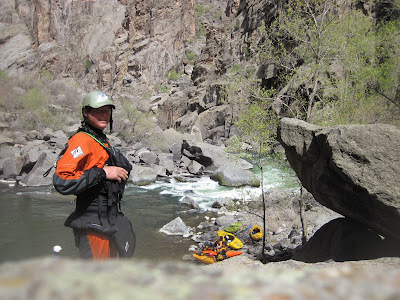 Cody looking down at Cave Camp and up at the tallest wall in Co. “Painted Wall” 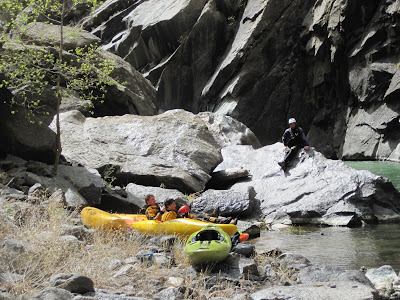 Lunch #2 at Cave Camp
Near the end of the portage is a rapid called New generation. With two main drops its cascades down through the rocks nearly 35’. Matt stopped and eyed the line with Nate. They both saw the line but both walked away. It was Matt’s first day in his boat of the season and he decided to play it safe.
The rapids after New Generation are usually a blast of a section. As we all piled into the river left eddy at Sieve City we stared down the line. Easy ferry from river left through a hole to river right. When my turn came to peel out of the eddy I spaced. Pulling out of the eddy to low caused me to fall off line and crash into the gate keeper rock I was trying to get right of. After rolling and bracing back up I saw it. The throat of the devil. It was a giant sieve and I was floating straight in. I haven’t been that scared in a long time. And I haven’t paddled that fast up stream in awhile either. I felt like I let the team down. Angry with embarrassment I kept to myself till the last and final portage around Great Falls. 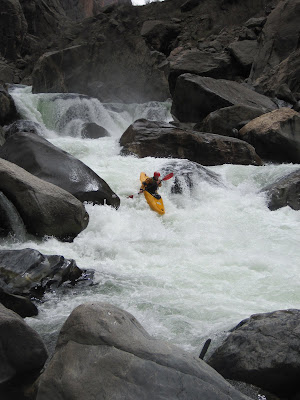 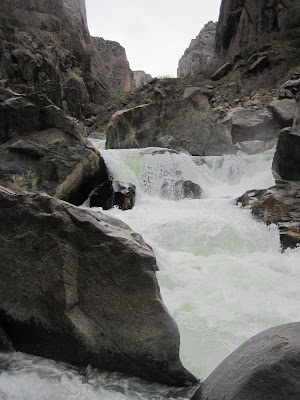 New Generation
With all of the Class V behind us we could now let our guard down. We paddled down to Chukar Trail at a fast pace to keep ourselves warm. Usually this is where you hike out. But we just ate lunch #3 and continued down into the Gunnison Gorge. I had never been on the Gunni Gorge before. I’m going have to come back with some sane friends and overnight this fourteen mile stretch. Lots of cool campsites and side hikes. This is a popular section for fishermen looking for the big one. I couldn’t bring myself tell them where the big one lives. We arrived at our take out “Pleasure Park” beaten from our fourteen hour day.
That night we drove from the comfort of our boats and back into the world of multiple jobs and school. This was a trip that will never be forgotten by those who participated. Trip of a lifetime!