4Corners paddler Chris Baer checks in with his final three trip reports from his trip to Mexico. Enjoy!

The Tasholo:
Another run with almost no beta. We were told, “there is a 50 footer, a rapid that killed someone and a 90 footer at the take out that someone ran accidentally. Have fun!”

Writing this a while later, I really wonder why we went in. Oh yeah, because it’s Mexico and it’s rad and it couldn’t be any worse then our first Big Banana epic.

We headed in and it was low flow, lots of bouncing off of rocks, but there are a hand-full of good moves here and there.
All of us had the 50 footer in the back of our heads. So we pressed on, bounced off of more rock, I got pinned and we all just got beat up. Definitely low water.
We bounced into another rapid, “Wow, that’s a horizon line.”
We took some time getting people out on the ultra sketchy scouting rock. 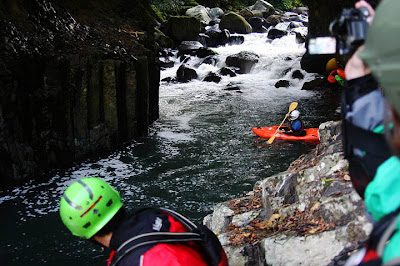 The team, on the sketchy rock.
If you look close you can see everyone’s boats piled up on the small beach in the top right corner.
Get out of your boat and swim up to a sketchy ledge 5 feet before the 50 footer. It goes better than it sounds.

Lance looked down at me in the pool, “It looks good. Just ride off the curler.”
“What about safety?”
“I’ll jump if you get hurt”

I paddled back up the eddy and fired off the drop totally blind. What a rush. 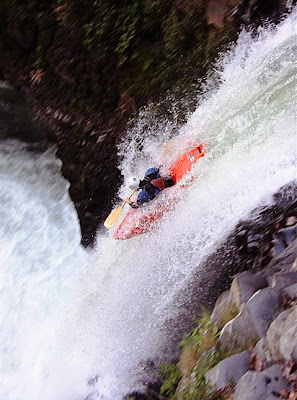 Me, Chris Baer dropping the blind 50 footer.
You can only run something blind once. 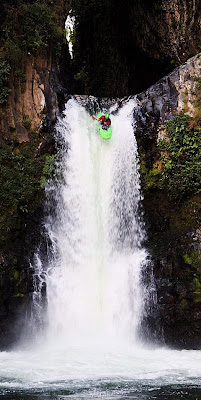 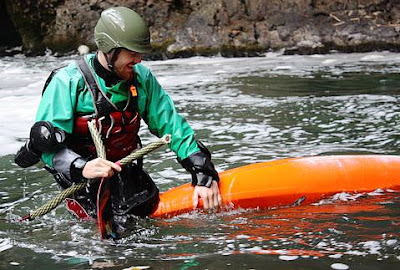 Davis Grove plugged it deep, imploded and broke his paddle, but managed to get to the eddy in his boat, laughing the whole time. 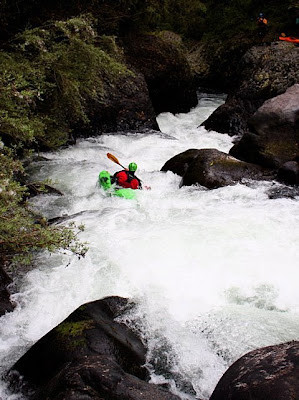 Lance making Jorge’s rapid (the one with the fatality) look pretty darn good. What you can’t see is that, just downriver, all the water goes under the wall again. 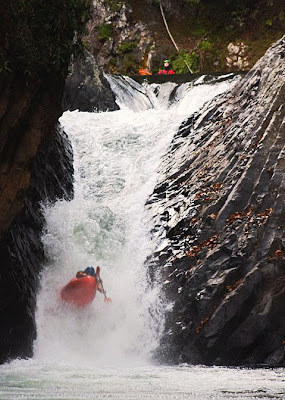 John McConville boofin’ the last good rapid big.
After the last good drop it goes back into a few boulder gardens. Be super heads up, the 90 footer is down there and it would be very easy to run it unintentionally. It also doesn’t look that good; all the water in the landing zone is swirling clockwise and there is no aeration on the right side of the falls, which is exactly where you would land. OUCH.
The hike out is a bitch, super steep and the bar at the top is usually closed.

Well, that’s it for Mexico. Stay heads up for my next installment: The Grand Canyon.