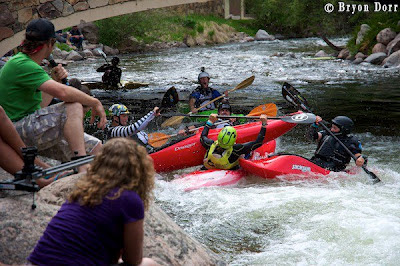 Competitors getting crushed during the Teva 8 Ball Race

The ultimate mix between Kayaking and American Gladiators. Creating maximum crowd enthusiasm, this race has multiple ruthless concepts entangled together. First there are four kayak racers unleashed onto the course at the same time. Second there is up to a dozen “8 balls” on the creek, kayakers with the sole purpose of changing the finishing order. Lastly put all of those people on an amazingly cozy creek with a thousand screaming spectators. 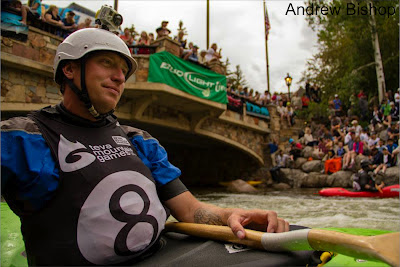 Awaiting the next victim

Clay Wright gave the pre-race talk. I found it hysterical. “There are a lot of obstacles down there, and they are all there to slow or… stop your down stream progress. If you get hit by one of them it is your fault, it is going to hurt. You are stupid.” Clay also gave the 8 Ballers a pre-race talk, CRUSH THEM!

Directly in front of the finish line lies the “Pit”, with embanked walls covered in spectators, a bridge in-front and behind. I had the feeling of being in an old Roman coliseum. Sitting with my stern across the right side of the finish line I awaited the lead kayaker to make their entry into my domain. I predetermined there fate. Leaving what looked like a great escape on river left and a horrible tight exit river right. Racer after Racer made the easy decision to go left and that was my domain. Six quick paddle strokes, my bow flying straight across their cockpit, crushing into their chest, dragging them across the river… leaving them inches away from the finish line. The crowd laughed, booed, and screamed for more as I took out local favorite 8 year old Henry Hyde. Thirsty for more the crowd cheered as I took out one leader after the next. We were causing NASCAR style crashes every five minutes. Changing the finishing order for hours on end is absolutely exhausting. During the battles I received more than a few wild paddle slashes and a few choice words by the competitors. By the end of the day it was all hugs and high fives, as competitors and 8 ballers were joking, telling stories of being run over and trounced. 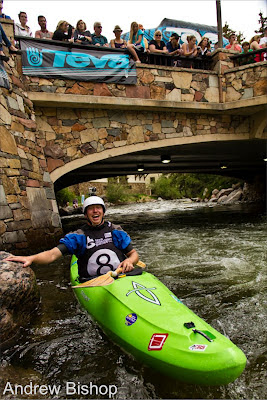 Smiles this big only come from one thing… Crushing!

Another adventure by Chris Baer