A couple of rafters approaching the Thing

Back in the south east, there is only one thing to do, well there is a couple things to do. Mainly hope for rain and when that doesn’t happen enjoy the guarantees: the Green Race and Tallulah release. My head was still spinning from three days of travel, returning to the States from Africa. I left West Virginia after Halloween with costume makeup still on my face, I had to get moving again. I swung through Kentucky for some White Lightning that would help fuel the next few weeks. First up was the Green Race, I have never taken the run lightly but I make the race into a joke. Last year I had a fun whistle in my mouth while launching off of Gorilla, this year I was trying to figure out how to one up myself. It was time for pyro techniques, roman caddles to be exact. 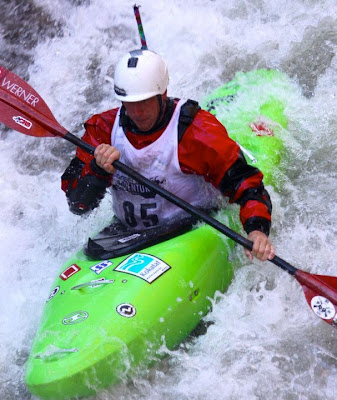 Chris Baer, with a Roman Candle attached to the back of the helmet, thanks again WRSI for protecting my head against all sorts of danger.

I came through Chefs, and eddied out to have a cohort place a roman candle in a sleeve on the back of my helmet. As the first round from the roman candle went off I knew I was back at home. The crowd grew loud, and I had an ever expanding smile on my face. I had explosives going off on the back of my head all while paddling towards Gorrila the crux of the entire race.My finish time was toward the back of the pack, but I had a smile knowing that I had more fun then most of the competitors combined… and that I was about to win the after party. 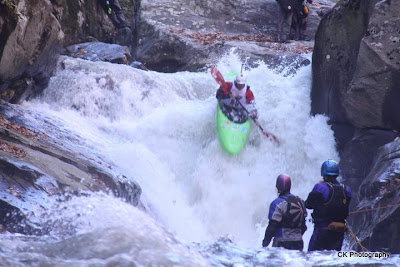 Chris Baer, getting my nose down on Gorilla

It was time to do a little planning for my next big adventure… Chile. I also had to plan the next weekends event Tallulah fest. I sat in the Henderson Ville library for three days of transferring video clips editing photos and checking on air plane tickets. After three days of sitting I was ecstatic for the weekend.The South East runs are usually damn releases, and that means that all two hundred boaters put on the river together. Tallulah is a prime example, lots of officials, lots of lines, and lots of sketchy boaters. Tallulah also draws an amazing amount of friends, between Green Race and Tallulah I was able to see more then a hundred kayaking buddies. That amount of paddlers in a small place usually leads to after parties. Late evenings sipping on white lightning and speaking of different adventures, past and present.Tallulah’s white water is super high quality, who doesn’t love sliding down a steep bedrock slide into a gigantic explosion called the “Thing”.The Tallulah river is dewatered for most of the year, there is a damn and hydro electric plant that divert the water from it’s normal course. For a couple weekends in the spring and fall there are recreational releases. These releases will never replenish the ecological damage done by dewatering a delicate ecosystem. These releases do give us a chance to enjoy a spectacular valley and hopefully leave a long lasting impression that dewatering rivers, is not a sustainable energy option. 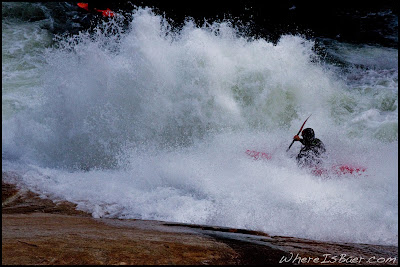 Random kayaker getting intimate with the Thing 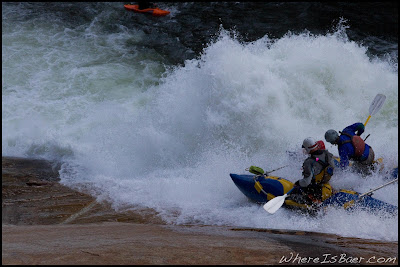 These guys had a interesting craft, it was originally from Russia and was over twenty years old

Two days of paddling on Tallulah and the weekend was over, time to repack the bags and get ready for my next adventure… Chile. Another adventure brought to you by Chris Baer. Tallulah from Chris Baer on Vimeo.