Twenty minutes out of Pucon you come across the Rio Palguin, its attributes are stunning. The crystal clear water cascades down steep gradient that manages to pool up at appropriate places and plunge off of clean waterfalls the rest of the time. Two years ago I celebrated Christmas by trying to paddle as much of the Rio Palguin as I could in a day. This year I tried to step up and run even more, it didn’t work… Christmas morning the group started coming together, and early that afternoon I put on the Rio Palguin with eight friends. To paddle the entire river takes skill, guts, and a bit of luck. Our group of nine was about to test the limits of all of these attributes. The run starts with the very optional Salto Palguin, an 80 foot waterfall with a super tricky entrance. The entire group, and most mortals, start below this impressive Salto. The normal run starts with a busy lead-in rapid that drops into a sticky hole immediately backed up by a rolling eight foot ledge. Next is a fast paced hallway that hangs a tight ninety degree turn and falls off of a twelve foot ledge. The ledge has multiple rock flakes to launch off of at it’s lip and one big hole to land in at its base. The third rapid is a super clean twenty foot falls. The twenty footer has an island in the middle, whichever way you pick, right or left, it offers similarly clean lines. Beyond the third falls the run transitions into boulder gardens for a bit. Approaching the next horizon line is the first exit point out of the canyon, and on your right there is a well beaten trail. The horizon line is a twelve footer referred to as the Crack Drop. There are two islands separating the water into three different cracks. The left and middle cracks are paddle-able, but have a very marginal risk to reward level. The other exit point is just downstream on river left. This exit is exceedingly hard to spot from the water, and a guide is suggested for your first run. It would be very easy to miss the take out and accidentally paddle into The Portage. It’s Christmas day and I am standing above The Portage, I’m feeling good and I have watched a handful of my friends paddle into it. Their lines all look very similar. Paddle to the edge of an eight foot crease and fall into the trough. Then they disappear under a rock that your standing on and reappear fifteen feet downstream. I have yet to see anyone in control as they reappear and immediately fall another twenty feet into the hydraulic below. This is the kind of rapid I have a tendency to laugh at and walk around. The risk to reward in my head just doesn’t calculate. Looking towards Casey Tango I giggle and said, “For the past four years I have been doing foolish things for Christmas.” Tango smiles. He says, “You have been doing foolish things your whole life.” That sealed the deal. I was going to borrow Casey’s plastic hand paddles and doggy paddle my kayak into the rapid known as The Portage… I was thinking this isn’t foolish, this is plain stupid, as I was trying to put the hand paddles on.

Casey Tango showing off the beauty of the Rio Palguin

Hand paddling in moving current is something I have never done before. Sure I have played around in a heated indoor pool, but never ever tried to go downstream with them. The only reason I was contemplating the hand paddles is that the entrance move is rather easy, and once you fall off the entrance you are simply out of control. It doesn’t matter if you have a paddle or not in there. There is absolutely nothing productive that you are going to do in that violent melee of swirling water under a rock. The fact is that a fair amount of people break their paddle, or worse, the paddle breaks them. The hand paddles seem to eliminate some of these variables. Clutching the hand paddles in my teeth and sliding into the kayak my smile started to grow. I was doing something way outside of my comfort zone. The hand paddles were adjusted and slipped over my fingers, again my smile widened. Pushing away from the eddy I got the first feel of the moving current on my new means of propulsion. A couple strokes later and I eyed up my target. One last big push and the water engulfed me. I felt the immense power of the entire river landing on my shoulders. Then the chaos started, and I was flipping over. I expected the rapid to be violent and chaotic, I knew I was going to roll at least once. What I didn’t expect was the next blow. My shoulder felt a sharp stab. All of my body weight, and most of the river’s power slammed my shoulder into a rock. There was a fair amount of pain but the ride wasn’t over. I felt my boat start to resurface and gave my wrists and hips a good flick. An eternity passed as I went cart-wheeling backwards off the twenty foot ledge. The impact at the base of the falls was rather unimpressive compared to the beating I had taken above. A few moments and thirty some odd feet below I snapped my hips and hands one more time and was sitting upright. I slowly hand paddled over to the edge of the eddy. My paddling companions with cameras and smiles on there faces awaited me. “Sorry guys, my Christmas is over.” The throbbing in my shoulder was starting and I was concerned that I had done legitimate damage to it. The hike out of the canyon was by myself. I pondered what I had done in the last year to piss Santa off so much. Coal for Christmas was starting to sound good compared to the beating I just received. The rest of the group continued downstream, minds set on a Merry Huckmas. A little boogie water and there is a mini canyon that has a tendency to acquire wood. After the mini canyon is another ominously named rapid, Boof to Swim. It is a twenty foot curler that comes off the right wall and lands in a pocket hole. Depending on flows this rapid can be fun, or a guaranteed swim. 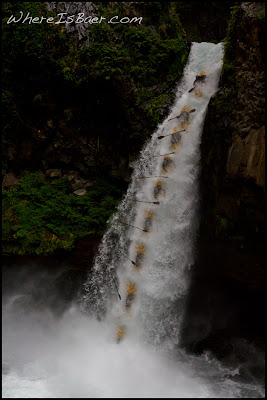 The big one, Medio Palguin, is up next. This rapid has more video, stills, and write-ups then any other in Chile. It is a spectacular seventy foot falls that consistently gives paddlers the big waterfall taste they are looking for. 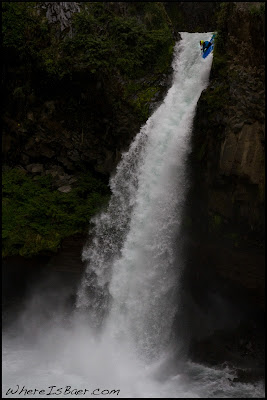 Gordon Klco peering over the lip of Medio Palguin

From Medio down the run tames a bit. There is one more suggested portage around Brennan’s, a tight mini canyon that leads into a deadly undercut room. The take out is a few kilometers downstream at a well traveled bridge.

The Puesco is the best kayaking I have done in years. The tallest drop is under six feet and there is a good eddy every couple hundred yards. Rio Puesco is all about kayaking, there are no stunts, no portages, and the photos look bland. I have been referring to it as Chile’s North Fork of the Payette. Heads up kayaking at it’s finest for kilometer after kilometer. 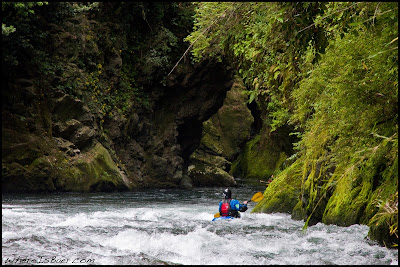 Casey Tango paddling into another beautiful canyon on the Rio Maichin

Beautiful is the first word that comes to mind when describing the Maichin. The river passes through a handful of gorgeous moss covered canyons. The overall class of the run is 3+ with fun boulder gardens and multiple channels. There are two rapids of note, the first one is early into the run and easily scoutable from river left. It is a multi-tiered drop that lands in a blasting hole, the downside to the rapid is that both walls are severely undercut. The other rapid of note is towards the end of the run, you can scout and or portage river right. 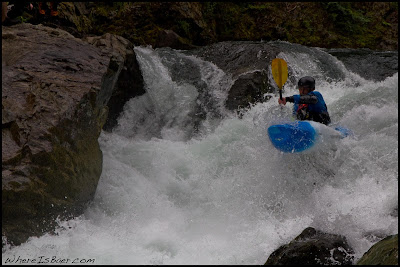 Casey Tango boofing the “hard” rapid on the Rio Maichin

Story and photos by Chris Baer