Well I don’t know what name is really going to stick, but damn is that place fun.

I was down in Durango helping the folks out at Four Corners River Sports, (they had a big swap over the weekend); and I got the invite to drop into the Middle Box. For years there has been rumor and tales of certain death to any one that proceeded past the Rockwood take out; there is even a plaque on the right side of the river to confirm the stories. At the same time there has been a few people that have gone in and either had scary extraction stories, or speak of some “OK” way out. What is true is that there is two sieves in the gorge that will kill you if you don’t get out in time.

So armed with a small amount of beta; Joel Cameron, Danny Flynt, Cruise Quenelle, and myself did what few have ever done, purposefully put in at the take out of Rockwood Gorge. 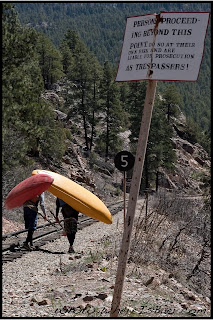 Joel and Cruise hiking in

The rapids start off gentle but quickly grow and the next thing you know you are punching through tightly walled-in holes. 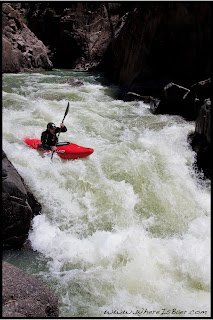 Joel about to skip over one of the first sticky holes 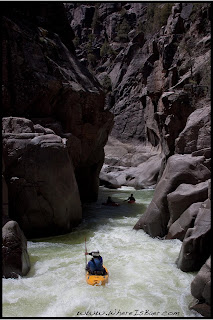 Cruise going deeper into the Canyon

We passed around a blind corner and there it was, “the Boulder Garden”. Boulder Garden is actually a really fun rapid. There is some pin potential but you can start left and zig zag around some boulders, finishing with a great little slide on the left. 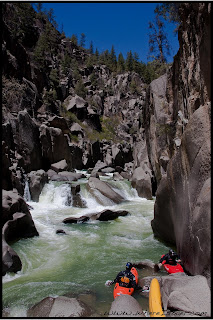 looking upstream into the Boulder Garden

Immediately eddy out left and scout the next rapid. There is a right and left line at the bottom, and as bad as the right line looks it goes pretty well. All four of us ended up going right and a couple of us even got a good boof off the center rock. 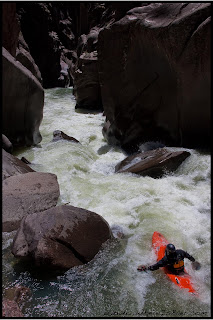 Danny, about to go right 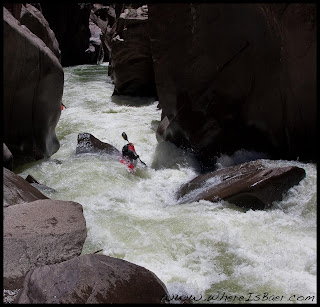 After this you need to be heads up, the take out is coming quick. The next rapid has a little slide to boof flake on the right hand side. The last rapid is really ugly; I would suggest wheel chairing on the far left. Then get out river left, look upstream and there is a tall slab of rock that you can use to walk, scramble, and climb out of the canyon. 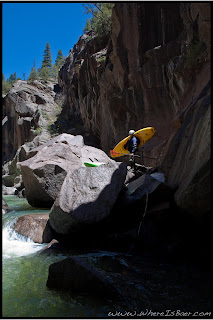 Cruise, with the hike out right behind him

Once at the rim, take a look around and enjoy, but stay quiet, you are probably trespassing. Walk down stream to the end of the ridge, you will be directly across the river from the normal put in. The hike back down is a little strenuous, my guess is there will be some ropes put in, in the near future. Put in and fire up the ugly drop, or ferry across and start “Pandora’s Box”.

We started our adventure at about noon, by the time we dicked around with the portage, we were putting on to run Pandora’s at 3 p.m.. After a little practice you could easily run Middle Box and portage the sieves in under an hour. Might be a better option then trying to sneak pass the property owner on the normal (illegal) put in route.

Back in the water we started through Pandora’s. The gorge immediately lives up to expectations, with steep and containing walls. The rapids are fun, and you usually can’t scout (I love not scouting). We bounce down through a couple more rapids and got to Swollen Member, Danny turned to me and says, “there is a decent hole down there, just punch it”.

I was right behind Danny, and I saw him get rolled in the back wash of the hole. I braced through the same funky water that rolled Danny and I saw him struggling to roll his boat. He tried to roll on one side and then the other and the boily water was continually rejecting his roll attempts. Then I saw that oh-so familiar wiggle of the boat as he kicks his way out and starts swimming. Danny manages to swim to the left rock outcropping directly above the next bouncy rapid. I hit the eddy with him and watched Cruise chase Danny’s boat through the next rapid. I hung out with Danny and we went through the options. Option one was swimming down stream, this looked extremely painful if not down right idiotic. Option two was to climb out, Danny managed to get 50 feet above the water and then couldn’t safely go any higher. Option three was going to have to work, I looked Danny in the eyes “stay put, stay warm, and I will be back to get you out of here”. I peeled out of the eddy not knowing how long Danny was going to be perched on that shelf.

I met up with Joel and Cruise down stream they had already pulled Danny’s boat from the water and were extremely bummed to hear that there was no way for Danny to climb out. We paddled a little ways down stream and it looked mildly possible to hike out of the canyon on river left. We stashed our boats high above the waterline and pulled every last piece of rescue gear out. The hike up and out of the canyon was sketchy at best; loose rock and cactus were constant hazards.

Once on the rim we hiked back up stream and looked for the mini ravine that Danny had perched himself on, hundreds of feet below. As we started to descend into the ravine we accidentally kicked a couple of rocks loose; Danny immediately started blowing his whistle. I was relieved that we had at least found the right ravine, unfortunately the ravine looked absolutely horrible to descend into. Ropes were broken out quickly as we rappelled and scrambled back into the canyon. We had to leave people at specific spots on the way down to reset the ropes, as we needed as many ropes as possible when Cruise reached Danny at the bottom of the canyon. A couple hours went by and we all were back at the rim of the canyon. 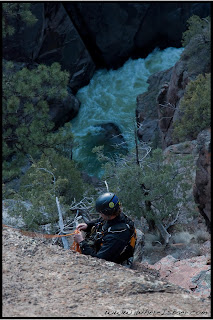 Danny almost all the way out of the canyon

Everyones hands where bloody from sharp rocks or cactus and our faces looked of total exhaustion. The sun had just set and we where giving up on the idea of boating out of the canyon. Just as the talks of hiking out started, we spotted another group of kayakers passing far below in the canyon.

I know I should know better by now but I had to say it, “Let’s do this!, let’s paddle out of here!, I want to finish this canyon”. Danny was hiking out for sure. His boat was safe, up and out of the water, but far from any place accessible. Cruise and Joel looked at me hesitantly, but agreed. We headed back down the canyon, lost our trail, and did some scrambling. I was about to give up and hike back out of the canyon when I spotted one of my markers from the original hike out to get Danny. We quickly reached the boats, and it was dusk. The three of us took a couple seconds to mentally prepare and then we were off. Cruise led the way, with very short descriptions and the constant last words of “follow me”. We bombed through most of the rapids and got to Rectilean; our initial plan was to exit the canyon there and save some fun tickets to help Danny with his hike out if necessary.

It had gone so well, sure there was a swim, sure it was dark, but damn the group was really working well. I said it again, “Lets fire it up! I want to finish this bitch!” Cruise looked me dead in the eyes and smiled, he reached down splashed some water on his face and didn’t even tell us the line. Joel rolled his shoulders a couple times reached down and grabbed a sip of water and chased Cruise into the rapid, I was right behind him. There were howls of delight at the bottom of the rapid, all of the hard stuff was over. Danny was hiking through the woods and we had some relative flat water to paddle to the take out.

We finally reached the take out and the group we saw from the rim was there. They had moved Danny’s boat into a more accessible spot and had called some friends to get them ready for a search party in case we didn’t show back up. I couldn’t have been happier, the boating community is so tightly knit. Everyone is always looking out for each other. Not to mention they had a couple beers to share. As we started to explain our three mile nine hour adventure, Danny comes jogging down the street just in time to put a beer into his booty. 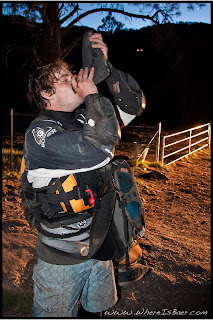 Danny repenting to the river gods

What ever you want to call that run, it isn’t that hard, but there is absolutely no room for error. There are sieves everywhere, and escape plans need a damn good team, and hundreds of feet of rope.

A huge thanks goes out to the group that moved Danny’s boat. 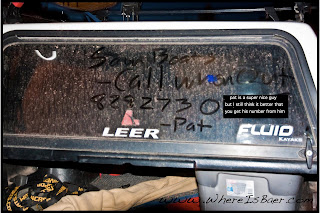 A even bigger thanks goes out to Cruise, Joel, and Danny for being calm under pressure and dealing with a epic adventure.